Mochi Media is proud to present this fast-paced action fighter with match-3 gameplay! Featuring awesome animations, sound effects, powerups and bosses, this is sure to be one of the most intense action puzzle experiences you’ll play in a while! Choose from multiple characters to travel through space and beat up on some baddies. Make sure to keep an eye on your health and special meter to unleash the most powerful attack across the galaxy!

HOW TO PLAY
BioGems is a turn-based match-3 game.
On your turn, swap one gem with an adjacent gem to form a line of three or more matching gems. To swap gems around, simply click or drag both gems. Gems will explode when matched in a chain of 3 or more, then new gems will fall from the top of the screen to fill the grid. This can cause a chain reaction of matching gems, giving you the effect of all gems destroyed in that combo.
Each gem type, when matched, will have an effect in the battle, like attacking or gaining energy. See the next section, Gem Types, for more information about their effect.
If you manage to match 4 or 5 gems in a row, their effect will be even more powerful, plus you will get a precious extra turn after this one! Prepare your moves wisely and you might play many moves in a row.

GEM TYPES
– Attack (grey, fist icon): Deals damage to your opponent. Costs a bit of energy.
– Energy Attack (purple, stars): Deals more damage to your opponent. Costs a lot of energy.
– Energy (yellow, lightning bolt icon): Restores a bit of energy.
– Life (green, heart icon): Restores a small amount of life.
– Defense (blue, shield icon): Prevents a percentage of the damage dealt to you during your opponent’s next turn.
– Counter (pink, arrow icon): Returns a percentage of damage dealt to you during you opponent’s next turn.
– Rage (red, fire icon): Fills your Rage meter on the top left of the screen. If you fill up the meter completely, you will unleash a devastating Rage Attack.
– Rainbow (black hole): Created after matching 5 gems. Swap it with an adjacent gem to destroy all other gems of that type!

TIPS
– Match as many attack (fist) and energy attack (star) gems as you can to reduce your opponent’s life points.
– Every attack against your opponent will cost you a bit of energy. Keep an eye on your Energy meter and fill it up by matching Energy gems when it’s almost empty.
– Matching 4 or 5 gems in a row will give you an extra turn – watch the grid closely!
– There is a timer, so be quick! Scan the board for the best possible in the short time that is allotted to you.
– Each battle gives you rubies. Don’t forget – you can collect more rubies by matching shiny gems. Spend them at the upgrade shop before tackling the next enemy.

TRICKS
– Try creating an L or a T shape with gems of the same type for a very explosive special effect.
– Think about what the board’s configuration will be after your move. Try to prevent your opponent from matching the gems he needs by shifting the board around defensively.
– If you’re having trouble defeating an enemy, don’t give up! Keep buying upgrades in the shop and you’ll eventually win.
– When your opponent is low on Energy, make sure to match Energy gems yourself so he doesn’t get
any!
– Match Defense or Counter gems when your opponent’s rage meter is almost full to reduce his Rage Attack’s impact.
– Make sure you do not waste Attacks or Rage on a shielded opponent. If the enemy matches lots of Defense or Counter gems, maybe it would be best to heal up or raise your Defense too. Globs: Path of the Guru 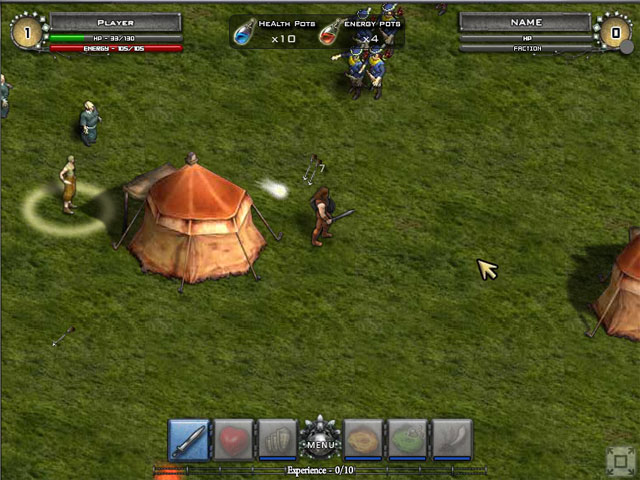